The Nokia brand, as rumoured, is returning to the mobile space to make Android-powered phones and tablets. The news was confirmed this morning in a press release from the company, which is now owned by HMD, a new company setup to enable the proliferation of Nokia-branded phones and tablets.

Here’s the official line from HMD on what’s happening:

“HMD has been founded to provide a focused, independent home for a full range of Nokia-branded feature phones, smartphones and tablets. To complete its portfolio of Nokia branding rights, HMD announced today that it has conditionally agreed to acquire from Microsoft the rights to use the Nokia brand on feature phones, and certain related design rights. The Microsoft transaction is expected to close in H2 2016. Together these agreements would make HMD the sole global licensee for all types of Nokia-branded mobile phones and tablets. HMD intends to invest over USD 500 million over the next three years to support the global marketing of Nokia-branded mobile phones and tablets, funded via its investors and profits from the acquired feature phone business.”

Microsoft’s Nokia “thing” will apparently end in the second half of 2016, leaving the market wide open for new Nokia handsets. The composition of the HMD is odd, to say the least. Nokia will not be investing any money in the project but it will receive royalties and sit on the board of HMD’s directors. Quite a few of Nokia’s old top brass will be returning to the fold as well.

“This agreement will give HMD full operational control of sales, marketing and distribution of Nokia-branded mobile phones and tablets, with exclusive access to the pre-eminent global sales and distribution network to be acquired from Microsoft by FIH, access to FIH’s world-leading device manufacturing, supply chain and engineering capabilities, and to its growing suite of proprietary mobile technologies and components,” said HMD in a press release.

What this means is simple: Nokia WILL return in 2016 with Android phones and tablets, as well as wearables off the back of its Withings acquisition. No doubt we’ll be hearing A LOT more about this and the future of Nokia in the coming weeks and months.

Can Nokia carve a niche for itself in the Android space? I personally think they can; the Nokia brand is strong and has a lot of history. A strong release could certainly do well. But I do concede, as the Telegraph notes below, that things won’t exactly be EASY:

“Apple dominates the high-end, especially in the West, and Samsung is a fierce competitor. Asian smartphone manufacturers – Oppo, Xiaomi, Huawei, Vivo – are eating into the feature phone market that was Nokia’s playground. Other respected names, such as Sony and LG, have struggled to have a real impact on the market. Motorola and BlackBerry, two other once-mighty phone makers, have not been able to trade on the back of their legacies: there’s no immediate reason that Nokia should be any different.”

It added: “The smartphone market, now bereft of innovation, has become ruthless, with profits difficult to come by. One suspects Nokia has missed its opportunity. We should wish it all the best, but the odds are stacked against it.”

BIG NEWS! Nokia has confirmed it will be releasing at least three Android phones before the close of 2016. It could be just two for 2016, however, as the third will depend how well testing goes — this latter phone could debut inside Q1 2017, likely at MWC 2017.

The other phone will be a cheaper, mid-range model similar to the Moto G4, no doubt. 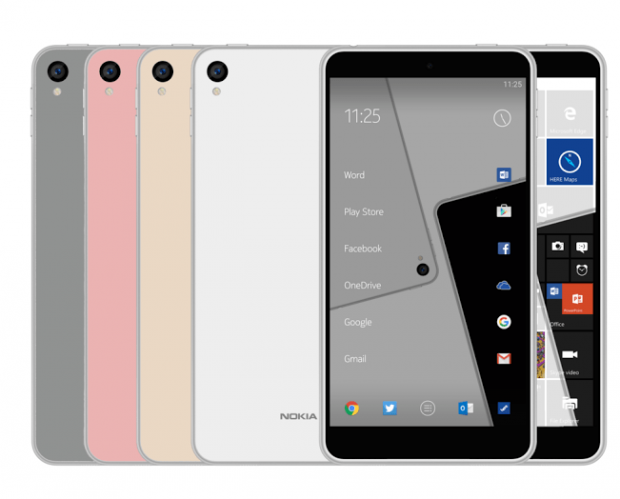 Nokia’s back in the game folks…or at least it will be very soon if some brand new details about its Android ambitions are to be blieved. We’ve heard before that Nokia has plans to re-enter the smartphone space using Google’s Android platform but there’s been a lot of vague back-and-forth on what to expect until now. On July 18, a new leak has revealed some interesting snippets about Nokia’s non-Microsoft, non-Windows, and non-Lumia plans. Two phones are in the works, both running Android and apparently coming in late 2016 or early 2017.

Following on from the peculiar news that HTC’s Nexus phones will be 5in and 5.5in models, the news for the Nokia duo is a 5.2in and 5.5in arrangement. Sources for this info comes via NokiaPowerUser’s “trusted sources” and also via Gizmochina, with GC’s report claiming both models will have 2K display resolutions, and NPU saying instead QHD on Super AMOLED panels for both. The reports also add we’re looking at a metallic build which will re-introduce Nokia’s distinctive build and design qualities of yesteryear (we’re guessing this means in terms of solid build, decent materials, and a nice feel in the hand), as well as IP68 waterproofing certification on both handsets. Additionally, the Qualcomm Snapdragon 820 processor is name-dropped for both devices too, meaning they’re both apparently more-or-less equal-footing high-end devices rather than a high and mid-ranger dual-launch.

The 5.5in model is mentioned to have a 22MP camera. NPU says the sensors are the “most sensitive ever and will be based upon Nokia’s extensive research on wonder material Graphene”. We can likely assume the camera will not be branded as PureView as this went over to Microsoft with its earlier acquisition of the Lumia brand and team, but with Nokia having pioneered such advanced camera tech once already it seems quite probably it’ll have re-developed something equally capable. We’re looking forward to a new high-end camera brand name from Nokia for this!

GizmoChina reports that the phones will be available in China (of course they will likely be available elsewhere too!) with an expected price of around $500 US. In terms of launch we are apparently looking at very late in 2016 or possible Q1 2017 if things roll back a bit.

As you can see, while there is some crossover between the reports there are also some glaring differences, meaning the picture is not entirely clear at this point. Still, the corroborating evidence confirms that there are indeed a couple of Android phones coming from Nokia at 5.2in and 5.5in. We’ll be sure to keep you posted with more details and evidence as we find it.

Will The First Nokia Android Phone Be Branded The Nokia C1? 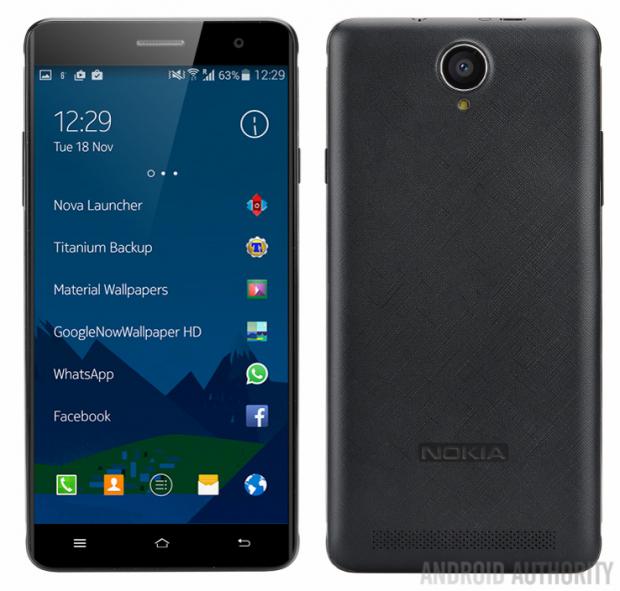 But as of April 4 it appears the C1 isn’t the only Android device Nokia is working on; we now have details of an alleged mid-range device called the Nokia A1 (scrap that: the A1 was an HILARIOUS April Fool’s joke). A render has leaked via Android Authority showing a somewhat similar design to the C1 (pictured further down this article). AA’s “trusted insider” said this is a mid-range device and it appears to be running Nokia’s Z Launcher over Android – a similar setup to the Nokia N1 Tablet. There’s not much else to go on at the moment and we’re left to simply ogle the new design and speculate on the specs.

Further details have leaked showcasing what we can expect from the Nokia C1. For starters,NokiaPowerUser received a render from a tipster, which is alleged to authentically show what the device will look like. It’s not clear if this is a genuine Nokia render, or a render made by someone who has been briefed on (or seen) the device, and NPU encourages readers to take things with a pinch of salt.

That said, it certainly looks the business, as we’re used to seeing very polished designs from Nokia. It appears to have a very thin metal body and a coloured glass or polycarbonate back panel, however there is something a bit iPhone-like about the design that’s sure to generate a few raised eyebrows.

According to the information handed to NPU, the Nokia C1 may come in two different size variants which will broadly share a spec sheet, but will have different camera tech, RAM, and onboard storage.

The display size is quoted at either 5.5in or 5in both with Full HD resolution. The 5in model will have 2GB of RAM with 32GB of storage space and an 8MP camera, while the larger 5.5in has 3GB RAM, a 13MP camera and 64GB onboard storage. Both will feature 5MP front-facing secondary cameras.

As for the software, it’s going to be Android-based, although we’d expect it won’t get away clean and will likely have Nokia UI stuff put on top. There’s also going to be Windows 10 variants in select markets, allegedly.

For posterity, here’s the quote from NPU’s source:

“The new range of Nokia mobile phones and tablets will be based exclusively on Google Android operating system,” reports AnanTech, “which is not surprising. It is logical to expect Nokia to introduce its own implementation of Android as well as exclusive programs. However, from a hardware standpoint, the first wave of Nokia-branded devices will likely use platforms developed by third parties. Some of Nokia’s traditional IP remains at Microsoft: the PureView camera technology (a massive sensor with an image co-processor and a set of sophisticated algorithms that “know” how to process oversampled images), ClearBlack display technology (a set of special filters on the display that can enhance blacks) and some other important assets. Which is why HMD and Foxconn (and, perhaps, Nokia?) will have to develop new technologies for high-quality imaging and displays because both features are crucial for modern handsets, especially in a competitive mid-range market.

We do not expect HMD and Foxconn to introduce custom SoCs for Nokia devices anytime soon both due to technological and financial reasons. Even though Foxconn has been adding semiconductor design capabilities into its war chest for some time now, it is unlikely that the company can produce anything comparable to Mediatek’s low-cost SoCs, and as a result the software will play a critical role for the new Nokia smartphones and tablets. A good news is that Nokia plans to control certain aspects of design, performance and feature-set of the devices, which could mean exclusive technologies and capabilities. Moreover, the real fruits from Nokia’s participation in the project should emerge with the roll-out of 5G networks in 2020 – 2022. Nokia is a big contributor to the standard and it could help its partners to capitalize on it.”