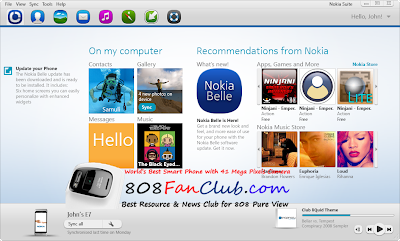 Designed from a clean slate, Nokia Ovi Suite offers a new, more user-friendly approach to Nokia PC software. In addition, this software is considerably slim and fast. The completely new user interface gives you    easy access to your important files and information as all the functionalities are available within one window. Nokia Ovi Suite is intended as the only computer application you will need from Nokia. It will eventually replace the current Nokia PC Suite and its variants like Nokia Ovi Suite 1.x and Nokia Nseries PC Suite. Nokia Ovi Suite integrates also the main features from Nokia Photos, Nokia Software updater and Nokia Map loader. Now supports Nokia Lumia Windows Smart Phones.

Here are some key features of “Nokia Ovi Suite”:
With the help of Nokia Suite, you’ll also be able to update your Nokia N8’s as well as other Belle device’s Firmware.

You can now keep your information in sync between your phone, Mozilla Firefox 8, and Mozilla Thunderbird 8. In the Home view of Nokia Suite, there’s an ever-growing collection of Nokia Store apps, games, themes, and entertainment at your fingertips. In Nokia Suite it’s also easier to find the messages you’re looking for, since the messages you have sent and received are now organised in groups of their own.New changes introduced in Nokia Suite v3.8:

Changelog 3.8.48:
Gain in reliability with a number of important error corrections

Update Nokia Suite from Tools > Software updates or Download directly from the link below.