Gravity Guy 2 has been exclusively made available for Nokia Lumia Windows Phone users ahead of iOS and Android users for the first time. Gravity guy 2 has received excellent ratings on Windows Phone Store and is available as a paid game. It is supposed to work with many Windows smartphones as this game doesn’t have special 1GB RAM constraints. For Nokia Symbian users, Gravity Guy is available on N8 Fan Club.
THE LONG AWAITED SEQUEL TO ONE OF OUR MOST SUCCESSFUL GAMES IS FINALLY HERE! GET READY FOR GRAVITY GUY 2! In a world where gravity laws were broken, a brave guy was held captive for rebelling and defying the rules! Being the first one ever to rise against the system, he found himself in danger, and in need to run for his life.

However, after being relentlessly chased down by the Gravity Troops, our hero was finally captured and beamed up to a space ship, only to find a terrifying truth: they were going to clone him.

As an evil plan to organize dangerous races across Gravity Guy’s once free world, his DNA was collected and the cloning process began. Along with our hero, other inhabitants were also cloned, so that every time someone loses, the race can be restarted.

Our brave Guy now finds himself on top of towers running for his life, jumping from one platform to another, while avoiding many hazards placed across his path. Just tap the button on the right side of the screen to raise the lifts and on the right to perform a jump – which will definitely come in handy!

There are 7 different clones to be used, each with its own special abilities:
Neon, Troop, Girl, Slim, Beast, Mech and Beauty!

Collect coins and earn points in order to unlock new power slots, and level up to get bonuses. Choose the power up you want in your next level! You can use the coins to purchase the power supplies in the shop! 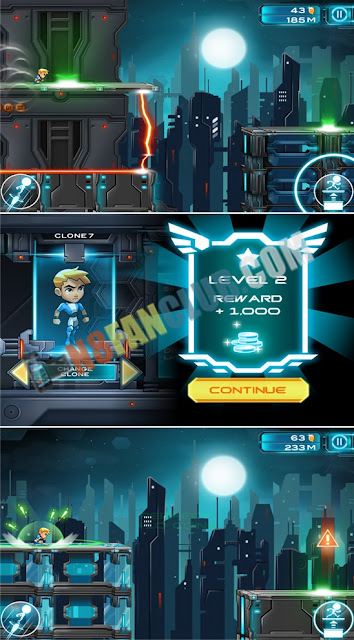