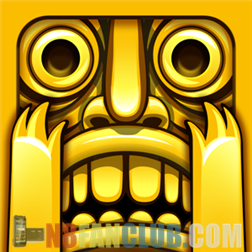 Much awaited game “Temple Run” has finally made its way towards Nokia Lumia Windows smartphones. However the game is only optimized to run on devices with 1GB of RAM (Lumia 920 & Lumia 820 at the moment), though the game’s installer size is just 23MB. Temple Run is available for FREE on Windows Phone Store to be downloaded. Since its been recently ported and is having a bit of bugs. Other optimized versions of Temple Run might become available for lower end Nokia Lumia Devices with 512MB of RAM such as Nokia Lumia 620.

All your friends are playing it – can you beat their high scores?! You’ve stolen the cursed idol from the temple, and now you have to run for your life to escape the Evil Demon Monkeys nipping at your heels. Test your reflexes as you race down ancient temple walls and along sheer cliffs. Swipe to turn, jump and slide to avoid obstacles, collect coins and buy power ups, unlock new characters, and see how far you can run!

“In every treasure hunting adventure movie there’s one scene in which the plucky hero finally gets his hands on the treasure but then has to navigate a maze of booby traps in order to get out alive. Temple Run is this scene and nothing else. And it’s amazing.”

REVIEWS
★ “Most thrilling and fun running game in a while, possibly ever.”
★ “A fast and frenzied experience.”
★ “Very addicting… definitely a very different running game.”
★ Voted by TouchArcade Forums as Game of the Week
★ One of TouchArcade’s Best Games of the Month
★ Over 200 MILLION players worldwide!

FEATURES
★ Simple swipe and tilt controls that are easy to use and just feel right
★ Level up your character and use crazy powerups
★ Original 3D running mechanic combining turning, jumping, sliding and tilting – the first of its kind!
★ Play as 7 different characters!
★ Incredibly fun, just one more time, endless game play! 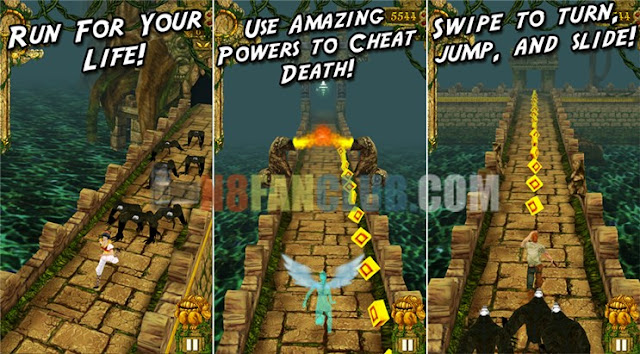