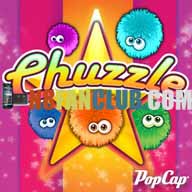 Match colorful Chuzzles in groups of three or more, and these lovable, googly-eyed furballs will sneeze, shiver and burst apart in hilarious explosive action. Send fur flying and scores soaring by popping Giant Chuzzles, Super Chuzzles and Rainbow Chuzzles. Charming Chuzzle antics, raucous retro sound effects and a funky soundtrack will keep you smiling every minute of play. Compatible with S^3 / Anna / Belle Smart Phones. Special thanks to Sunil for uploading it for us.