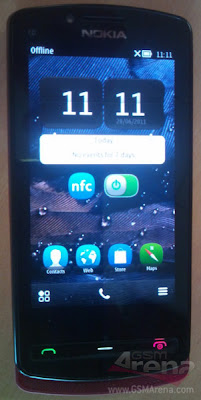 A tipster just sent us photos of the Nokia 700, a.k.a. Zeta, along with some specs though they didn’t confirm if there really is a 1GHz processor inside. In one of the photos you can see the new homescreen of Symbian Belle, the successor of Anna.

They did give us some specs though – a 3.2″ nHD AMOLED screen, which points to this being a Nokia C6-01 replacement. The Nokia 700 is also reportedly quite light (a bit over 80g) and measures 110 x 51 x 10mm, which doesn’t quite mesh with the “thinnest smartphone ever” claim, but those measurements can change as its design is still being developed.