During my lecture I read some comments here (thanks Alex68 for tip) and on twitter about hyperX’s mod for the N8 (he’s the guy responsible for giving the i8910 life after the glorious abandonment from Samsung) – google didn’t show anything but vaibhav from the handheldblog found the original hyperX post.
First to note is the N8′s image sizes. They’re incredibly compact. 12MP images are around 1-2MB. In comparison, the i8910 form samsung has 8MP at 3-4MB with the Panasonic Lumix TZ10 (camera) at a hefty 5MB for its 12MP shooter.
With file compression, you loose a touch of detail. Remarkably that’s less evident with the N8. This mod unfurls the compression from a slight 1-2MB to 11MB.
Just bask in that heavily noise reduced image. Look at the leaves and the clarity of the licence plate at this crop. Now the N8 has very high detail anyway (despite what engadget shows in their tests), and it would be interesting to see a comparison image of non-hacked N8. 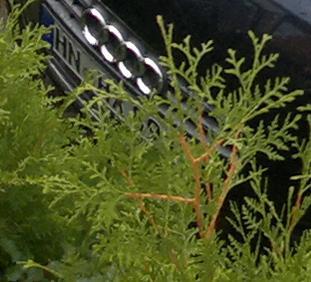 Download the original file from here.
Damien Dinning (head honcho, Nokia Imaging) has mentioned before that they are working on increasing frame rate (as well as possible continuous autofocus) – whether that will ever reach consumers and if so when is uncertain.
YouTube version below, though note that it’s still processing and youtube does mangle the quality/frame rate of the uploads.