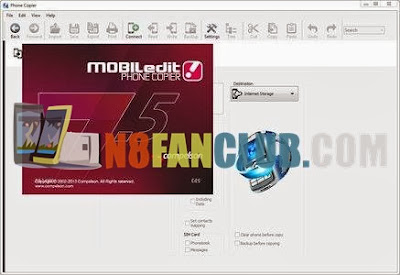 MOBILedit! Phone Copier – New phones are tempting for buyers, but everybody knows that a new phone is practically unusable as it is empty; no calls or text messaging can be executed. To put all current contacts in the new phone is also pretty complicated. Import from Facebook or other social networks doesn’t help as there are rarely available mobile phone numbers. Import from SIM is not enough as it has a very limited list of 14 character names with a single phone number. The only place with up-to-date phone numbers is the contact list stored in the mobile phone’s memory. It is being created by users for years with not only phone numbers but also addresses, photos, notes, emails. That’s true value users entered into their phones. And you are not willing to lose any of this information. Shared by Kokopelli MVD.

The Phone Copier can help migrate contacts and data from thousands of different phones that users could possibly have. It has been instilled with our incomparable know-how in the area of phone management software that we have developed over the last 10 years. We have analyzed and developed support for almost all phones from all manufacturers. Our technology of extracting data and understanding hundreds of different protocols is on display in our MOBILedit platform which is the gold standard around the world and is relied upon by the US military, FBI, DHS, and CIA just to name a few. It allows users to read phones locally on a PC through a classic cable, Bluetooth or infrared connection as well as upload phone data to an internet cloud and download content to a target phone.

In addition to supporting common mobile phone brands like HTC, Nokia, Sony Ericsson, Samsung, LG, and Motorola, MOBILedit! is also at the forefront in supporting the many different smartphone operating systems including Android, iPhone, Blackberry, Symbian, WM/Windows Phone and Bada.