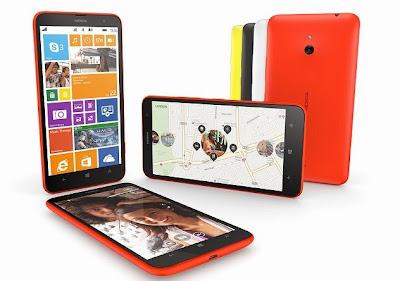 Similar to the Lumia 1520 – and building on the affordability of the Lumia 520 – the new Nokia Lumia 1320 also features a 6-inch screen and a wealth of features at a lower price.

But this does not mean that there was a compromise on quality. The phone boosts a 720p HD screen made with Gorilla Glass 3, and features a super sensitive touch screen. It includes Nokia Music and HERE Maps for great music and location experiences, and welcomes both Nokia Camera and Nokia Storyteller apps, available in the Windows Phone Store.

With the latest apps, the best from Nokia, and the best from Microsoft supported by LTE connections you can make the most out of the bright large screen on the Lumia 1320. Sit back and relax while you play the latest Xbox games, read web content, or watch movies on the six inch screen. A wealth of content can be stored using the free 7GB of SkyDrive storage or with the addition of a micro SD card adding up to 64GB more space.

When can I get it?

The Nokia Lumia 1520 is expected to begin selling this quarter in Hong Kong, Singapore, the United States, China and Europe (including Finland, France, Germany, and the UK), followed by other markets; and it has an estimated price of around USD 749 before local taxes and subsidies.

The Nokia Lumia 1320 will be available in a choice of orange, yellow, black, or white, and is planned to be available first in China and Vietnam in early 2014, followed by other Asian markets, India and European markets. It carries an estimated price of USD 339 before local taxes and subsidies.

Many of the new features and imaging innovations found in the Nokia Lumia 1520 and Nokia Lumia 1320 will be coming to existing Nokia Lumia smartphones running on Windows Phone 8 aligned with the next software update called “Lumia Black”. The update, including the latest Windows Phone update from Microsoft, is expected to begin rolling out in early 2014.

Specifications for the Nokia Lumia 1320