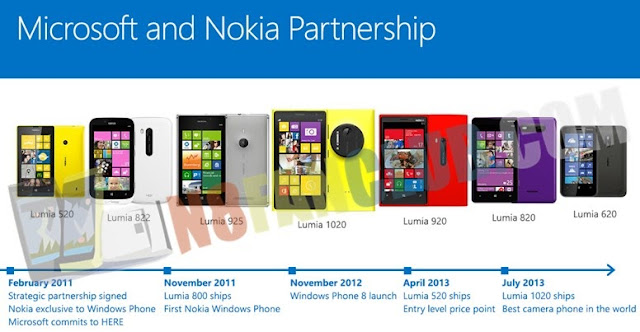 Microsoft Corporation (REDMOND, Washington) and Nokia Corporation (ESPOO, Finland) today announced that the Boards of Directors for both companies have decided to enter into a transaction whereby Microsoft will purchase substantially all of Nokia’s Devices & Services business for , license Nokia’s patents, and license and use Nokia’s mapping services for 5.44 Billion Euros in total cash.

Under this transaction Microsoft will be holding the smartphone section including Lumia & Asha platform, however Series 40 & Series 30 java feature phones will still be under Nokia’s control for the period of 10 years. Now we won’t be able to see any SMARTPHONE from Nokia. This acquisition of Nokia has definitely shocked many of us, but it was obvious to happen, as many people still remember Stephen Elop (Nokia’s C.E.O who made this acquisition smooth) as a Trojan horse. Stephen Elop got demoted as a Nokia’s CEO – actually it’s just a move to put him in charge of the Devices & Services division, so that he moves to Microsoft along with the division (chairman of the Board of directors Risto Siilasmaa is taking over as interim CEO). Elop will report to Ballmer at first, but talk around town is that he might as well step in the shoes of the now departing Microsoft’s CEO.

Under the terms of the agreement, Microsoft will pay EUR 3.79 billion to purchase substantially all of Nokia’s Devices & Services business, and EUR 1.65 billion to license Nokia’s patents, for a total transaction price of EUR 5.44 billion in cash. Microsoft will draw upon its overseas cash resources to fund the transaction. The transaction is expected to close in the first quarter of 2014, subject to approval by Nokia’s shareholders, regulatory approvals and other closing conditions. 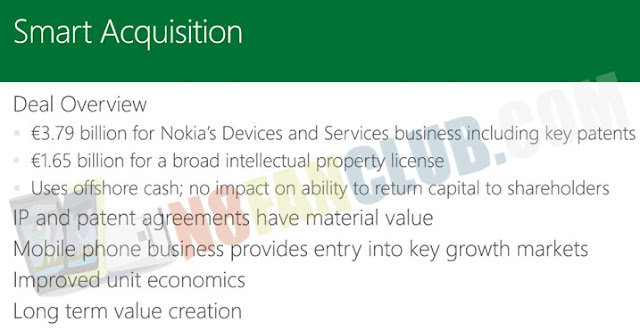 Building on the partnership with Nokia announced in February 2011 and the increasing success of Nokia’s Lumia smartphones, Microsoft aims to accelerate the growth of its share and profit in mobile devices through faster innovation, increased synergies, and unified branding and marketing. For Nokia, this transaction is expected to be significantly accretive to earnings, strengthen its financial position, and provide a solid basis for future investment in its continuing businesses.

Under the terms of the agreement, Microsoft will acquire substantially all of Nokia’s Devices and Services business, including the Mobile Phones and Smart Devices business units as well as an industry-leading design team, operations including all Nokia Devices & Services-related production facilities, Devices & Services-related sales and marketing activities, and related support functions. At closing, approximately 32,000 people are expected to transfer to Microsoft, including 4,700 people in Finland and 18,300 employees directly involved in manufacturing, assembly and packaging of products worldwide. The operations that are planned to be transferred to Microsoft generated an estimated EUR 14.9 billion, or almost 50 percent of Nokia’s net sales for the full year 2012. 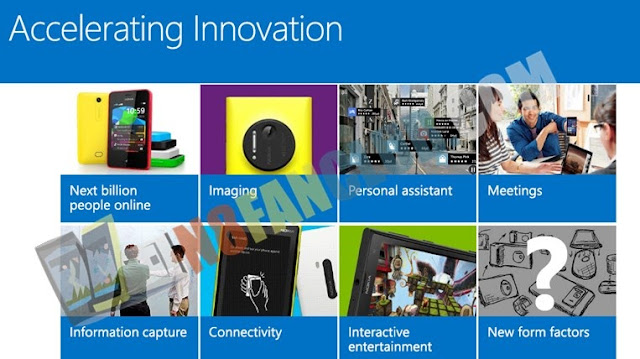 Microsoft is acquiring Nokia’s Smart Devices business unit, including the Lumia brand and products. Lumia handsets have won numerous awards and have grown in sales in each of the last three quarters, with sales reaching 7.4 million units in the second quarter of 2013.

Microsoft is also acquiring Nokia’s Mobile Phones business unit, which serves hundreds of millions of customers worldwide, and had sales of 53.7 million units in the second quarter of 2013. Microsoft will acquire the Asha brand and will license the Nokia brand for use with current Nokia mobile phone products. Nokia will continue to own and manage the Nokia brand. This element provides Microsoft with the opportunity to extend its service offerings to a far wider group around the world while allowing Nokia’s mobile phones to serve as an on-ramp to Windows Phone. 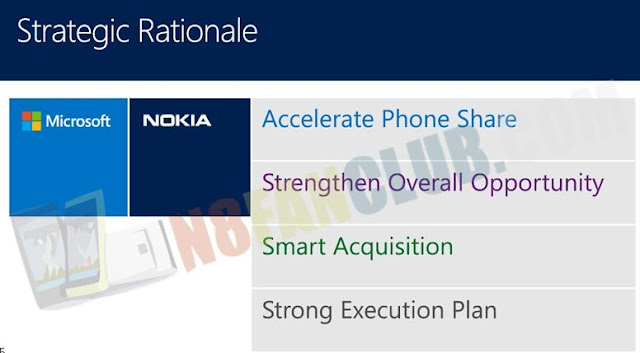 In addition, Microsoft will become a strategic licensee of the HERE platform, and will separately pay Nokia for a four-year license.

Microsoft will also immediately make available to Nokia EUR 1.5 billion of financing in the form of three EUR 500 million tranches of convertible notes that Microsoft would fund from overseas resources. If Nokia decides to draw down on this financing option, Nokia would pay back these notes to Microsoft from the proceeds of the deal upon closing. The financing is not conditional on the transaction closing.

Microsoft also announced that it has selected Finland as the home for a new data center that will serve Microsoft consumers in Europe. The company said it would invest more than a quarter-billion dollars in capital and operation of the new data center over the next few years, with the potential for further expansion over time.

Nokia expects that Stephen Elop, Jo Harlow, Juha Putkiranta, Timo Toikkanen, and Chris Weber would transfer to Microsoft at the anticipated closing of the transaction. Nokia has outlined these changes in more detail in a separate release issued today.

Nokia plans to hold an Extraordinary General Meeting on November 19, 2013. The notice of the meeting and more information on the transaction and its background are planned to be published later this month.

Nokia didn’t remain sincere with its loyal Symbian & MeeGo fans and left their core assets (hard core fans) with no other option to switch to another platform that is certainly Android for most of us, while few will opt for Lumia Windows Phone. What are your thoughts about the current situation? Drop your comments below.