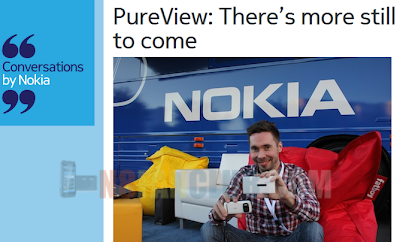 Juha Alakarhu, head of imaging technologies at Nokia, at the CES expo in Las Vegas reveals about Nokia’s next PureView innovation after Nokia 808 PureView & Lumia 920 PureView.

Nokia has always been an innovator in imaging. When Juha first joined Nokia in 2004, we released the very first one megapixel phone, the Nokia 7610, but 2012 stood out as an incredible special year in Nokia’s history.

Five years of hard work came to fruition when Nokia announced the Nokia 808 PureView at Mobile World Congress in Barcelona back in February of last year. The 41-megapixel shooter took the entire industry by surprise and raised the bar for what kind of photos you’re able to capture with a phone. “It was like a mythical moment,” Juha tells us. “We had these special covers that masked the device from prying eyes, and we were finally able to take them off and show it to the world.”

2012 also brought us the head-turning and award-winning Nokia Lumia 920, which applies PureView to solve perhaps the biggest challenge in photography: capturing good photos in low light conditions, such as at night or in a dimly lit room. “Consumers are amazed by the results they’re seeing from Nokia Lumia 920 in these conditions, and we have so many ideas for how to improve in this area”, says Juha.

So what is PureView, and where is it heading in the New Year? “Well, I think it’s important to underscore that PureView doesn’t mean any specific technology,” says Juha. “It’s the latest and greatest in imaging. When you buy a Nokia phone with PureView, you are getting our highest quality imaging innovation.”

It’s basically about problem solving, Juha explains. “Nokia 808 PureView solved the problem of zooming and sharpness, and for Nokia Lumia 920, it was low light.

Looking ahead, Juha says there are plenty of challenges to overcome. “Imaging is extremely subjective, and you can always make something better.” Pressed for more details, he just smiles at us but does throw us a little bone: “We’re really driving innovation in key areas to deepen and enrich the imaging experience. I can’t tell you about the specific things we’re working on. Safe to say it’s very cool.” Oh, well. At least we tried.

We steer the conversation in a new direction and ask about the work involved in creating the next breakthrough in imaging.

“We’re looking at imaging holistically, from optics to display, and working on all of those to improve. It’s very complicated, and the trick is to make all these building blocks work well together,” says Juha. “But it’s not just purely hardware innovation. You need to get the software to work as well. That’s the real beauty — that’s what makes a truly amazing solution.” 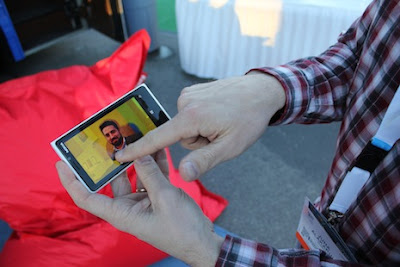 Juha tells us that the hardware and software teams sit together and crank out some really amazing stuff. “I’m really proud, we have a damn good team. Hardware doesn’t work without very good software, and there’s no software that can fix bad hardware.”

Asked if there’s one major problem he would like to solve in the years ahead, Juha takes his time before answering. “I’d love to make it super easy to get great photos every single time,” he tells us. “You should be able to give your phone to a 3-year old and still capture amazing photos, like with a big DSLR camera.

When you’re head of imaging technologies at Nokia, what gets you really excited? Juha pulls out his Nokia Lumia 920 and starts showing off the Cinemagraph app. “It’s a real eye-opener. It blurs the line between photography and videography,” he says.

“You can do a lot of really cool things with Cinemagraph. It might just be a small part of the image that’s moving, something really subtle, but the effect can be truly mind-blowing.”

There’s also the whole social side of imaging. People mostly used to take pictures and print them on paper, and today, we’re sharing our photos on Facebook, and you’ll get comments from your friends. “I’d like to evolve that interaction,” Juha says. “Share new content in new ways.”

And then there’s the technology and how it’s evolving. “People are working on exciting technologies that can capture so much more. Huge innovations are happening right now,” says Juha. “We’re looking at imaging from so many different angles.”