A new Spider-Man reboot launches this Summer, and as you’d expect, our friends at Gameloft are preparing to launch a matching tie-in to coincide with the film’s debut. The Amazing Spider-Man is a huge departure from what we have seen on iOS thus far. The reason? Open- world action baby!

The Amazing Spider-Man takes cues from titles like Grand Theft Auto III and even Gangstar Rio: City of Saints. With open traversal around Manhattan, you can swing around and take on various missions at your leisure. While the game is still in development, the web swinging feels extremely satisfying as Spidey twists and contorts in a way that’s reminiscent of the new movie’s trailers. The combat is reminiscent of Rocksteady’s Batman games. Enemies typically surround you in a circle, and you have the freedom to take them down in epic fashion with chain combos. At one stretch, we had a thrilling 86 hit combo going. Compatible with S^3 / Anna / Belle Smart Phones. 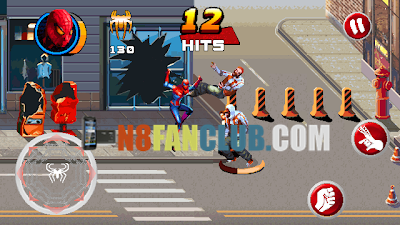