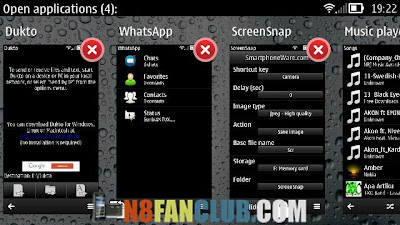 Nokia Belle FP1 is the next most anticipated update for first generation of S^3 smart phones after Symbian Belle. Though Nokia N8 and others (1s Gen Devices) will get a trimmed down version of Belle FP1 and even Belle FP2.


The trimmed down version of Belle FP1 will bring minimal processor overclock, Browser version 8.2 and a new updated Nokia social client, according the reliable source (Nokia Marketing Manager – Mattia Fiorin). There were no words on the availability yet, but you guys can expect Trimmed Belle FP1 in coming months, most probably June – July. We would also love to see the new eye candy task manager in this update!!

FP1 for N8 will be available soon, and will include, in particular, the updating of the browser to the new version 8.2 and Nokia Social.
The update will still be small compared to the official FP1, already available for the S^3 terminals that support it, adapted to the processor on the N8 (already exploited almost to the limit with the latest updates).
Probably there will be a minimal overclock the processor (as far as possible for ARM11 mounted on N8).
According Fiorin always, then, N8 will also FP2 (as Carla got cancelled).