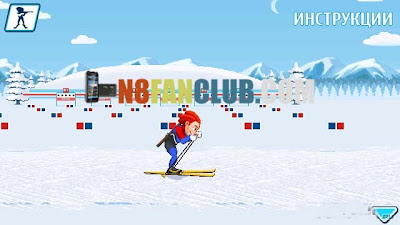 Playman Winter Games is one of many games in Mr. Goodliving’s Playman series of sports games. The game was originally 2D, but this version is remade in full 3D. As in the 2D version it features four common winter sports events:

In Slalom the player uses the right and left keys to steer his skier through each gate in the slope. Sharper turns leads to decreased speed and missing a gate leads to a time penalty of five seconds.

In Bobsleigh the player steers his sleigh by pressing left or right. A circle helps him to see if he’s on the optimal spot and by succeeding with this the speed increases.