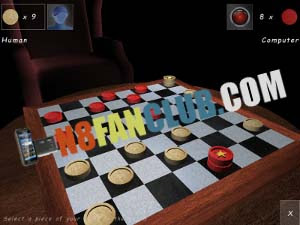 Checkers Lounge 3D brings you one of the most famous board games to your mobile device. Tip and slide on the screen to rotate the view in all three dimensional angles. Use two fingers to zoom in and out. Simply drag & drop the game pieces to the desired location. Play locally against friends, against the computer or against people all over the Internet. Compete with the world and improve your world ranking position. Do you make it into the top ten?