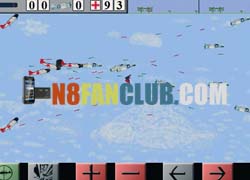 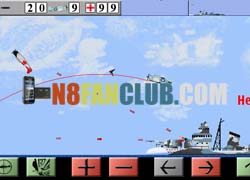 In Fighter Pilot: The Pacific War, you will take command of your SBD Dauntless dive bomber to support your troops, on land, in the air or at sea, while protecting your home carrier the USS Victory from enemy torpedo bombers.

Help your Marines to push the advance by hitting enemy strong points with precise bombing attacks or stop an enemy counter-attack by releasing a well timed cluster bomb. If you dare, take on an enemy heavy bomber before it can release its enormous bomb load on your troops, but avoid its deadly turrets.

Your strategy counts! Each mission can be won by numerous different approaches. Either obliterate an enemy airport to secure air superiority or let your advancing troops catcher it to gain an important forward base to rearm and repair your aircraft. Go for the direct kill and sink an enemy capital ship while skilfully evading enemy antiaircraft fire along the way or slowly fight your way towards your target until it is completely defenseless. While your troops are engaged at many points at the same time, you need to make the decision where they need you most.

Dodge attacks from enemy fighters by using innovative air manoeuvres, while your trusted second man on your plane will take them down with his mounted gun and with the innovative scoring systems it will not take long to see who is the best Ace in the Pacific War.

All this is and more is waiting for you. Strap in and get ready for the flight of your life!

Features:
Refight all important engagements of the Pacific War – play 16 historical inspired missions divided into 4 campaigns from 1942- 1945, ending with the final assault on Okinawa
Challenge yourself or just have fun – enjoy the game the game on the easiest difficulty settings with infinite weapons and lives to blow yourself past everything in your path or push yourself to the limit by doing the almost humanly impossible on the hardest setting

Fly a variety of missions as a US Marine pilot – experience naval battles, convoy raiding, air interdiction, landing or defence operations or enourmous dog fights for some fast action fun.

Understand the Pacific War better as ever before – with plenty of historical background information for each mission and campaign. In addition, to a campaign map that shows you the progress of the American and Japanese advance in the Pacific Theater it will be easier than ever to grasp the war in its entirety

Weapons – Choose from 6 different weapons to equip your plane, each with its own benefits against certain targets

Guts and Skill – During the fast paste action on the battlefield make the right decision to attack your target, either go for a low level altitude bombing and expose yourself to enemy fire or dive upon your target from thousand of meters from above for a high precision attack risking to crash your plane into the ground

The battlefield is alive – Ground troops will try to capture strategic points and engage in firefights with their foes or watch other American or Japanese planes unleashing havoc upon their enemies. With over 300 independent objects engaging at the same time, the battlefield will always have something for you to do