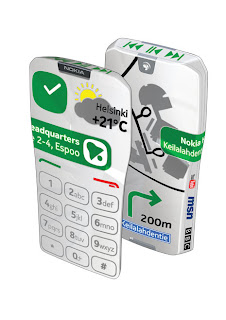 The GEM device changes appearance from camera to phone or map according to the function selected by the user. It could even display advertising messages on the back of the phone. The back and front are also interactive, making it possible to pinch and zoom the rear of the phone while getting a constant clear view of the image on the front.
Nokia Senior Design Manager Jarkko Saunamäki, who led the team which invented GEM, yesterday told Nokia Conversations: “Now, when you launch an application like the camera, your mobile phone still looks like a mobile phone, but with GEM, when you launch the camera application, the whole phone looks like a camera.
You can have one image wrapped around the whole device or one on each side, as demonstrated in the stylish video animation when the woman user photographs some wallpaper and adopts it as the design for her phone casing.
“It’s the ultimate customizable device,” says Jarkko.
“There is no default appearance. If you play a lot of games it will usually resemble a games pad, for example.
“It’s called GEM because polished precious stones have several sides. Also it’s a concept which is like a raw gem, but it needs to be polished to become a real product.”
Footage also shows that users could have the option of carrying advertising on the back of the phone while making calls, in return for a discount on bills.
Another scene shows the user altering the mood of her avatar. You also see interaction between phones when one user pours contact details and photos into the woman’s phone.

The phone could also display 3D images allowing viewing from all angles, allowing the woman user to take a cheeky peek up a man’s towel by tilting the phone. But Jarkko says the most important uses, based on studies, are the interaction between all sides of the phone and changing appearance. On the mock-up phone there were virtual buttons and logos all around the phone, just like your browser’s favorites bar.

If you liked this conceptual video and Nokia Gem, you might also be interested in Nokia Human Form