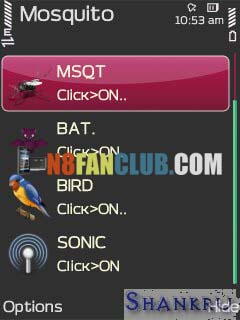 Bat repellent:
Mosquito repellent software simulation is making bat’s ultrasound, because “the bat is the natural enemy of mosquitoes, is generally believed that mosquitoes can identify and avoid the bats emit ultrasonic. ”

Sparrow mosquito repellent:
Mobile phones play voice of the Sparrow, mosquitoes, after hearing away from sparrows to sound.

Ultrasonic mosquito repellent:
Issued by the mobile phone ultrasonic sound source will allow the mosquito to give up food and water, and move away from the shelter premises. This loud pressure of ultrasonic away from human ears of feeling range, for human (including baby pregnant women) and the family pet (as cat, and dog, and fish, and bird and the farm feeding of animal,) does not caused any of hurt, also does not interference TV, and radio, and electronic anti-theft system, and fire and investigation smoke type alert system, and heart rhythm regulator, and hearing aids and other of electronic system,, also does not hurt plant and the crop.