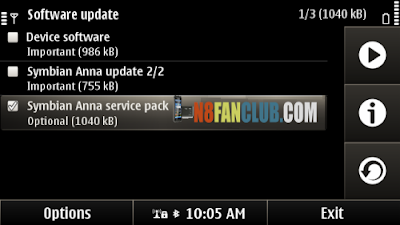 Symbian Anna Service Pack software update is being rolling out for Nokia N8, E7, C7, X7, E6, and C6-01 world wide. The update is around 1 MB in size and is now available via OTA and Nokia Suite. Last week we had a news regarding Symbian Anna firmware version 25.007.
The release notes state that this updates brings performance and stability improvements , lets you scroll smoother through messages, quicker geo-tagging while taking photos and more.
You can update your Anna device over OTA (Over-The-Air) or by using Nokia Ovi Suite. All Symbian^3 and Anna smart phones have UDP (User Data Preservation) support, but still its always wise to backup all of your personal data before updating the device firmware. The Symbian Anna Service Pack update does not change the firmware version on devices, the update over OTA its about 1 MB approx in size.