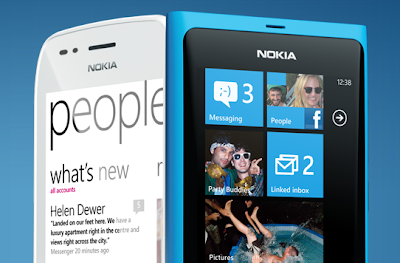 Nokia Lumia 800 is very similar to Nokia N9 in terms of visual appearance of its hardware. The device is made up of polycarbonate materials and has a 3.7“ curved Clear Black AMOLED Display. Equipped with 1.4Ghz CPU Powered by a Snapdragon chipset with a single-core Scorpion and 512MB of RAM and a Carl Zeiss 8 Mega Pixel Camera Lens with f/22 aperture, auto-focus and dual LED flash. Just like Nokia N9, Windows Phone Devices would also be utilizing the microSim cards. Internal storage capacity of 16GB is available along with 25GB of Micorsoft’s Skydrive cloud storage. The device is running on Windows OS for Mobile Phones known as Windows Mango 7.5

The Lumia 710 features the same 1.4GHz single-core processor and same ammount of RAM as the Lumia 800. It features the same-sized 3.7″ WVGA display with a ClearBlack tehcnology, but unlike the Lumia 800, it’s a TFT one, not AMOLED.
The camera of the Lumia 710 is a 5MP auto-focus one with a single LED flash. As connectivity goes, this WP7 smartphone offers Wi-Fi 801.2 b/g/n and Bluetooth 2.1. A-GPS, 3.5mm headphone jack and a micro-USB connector round-off the package.