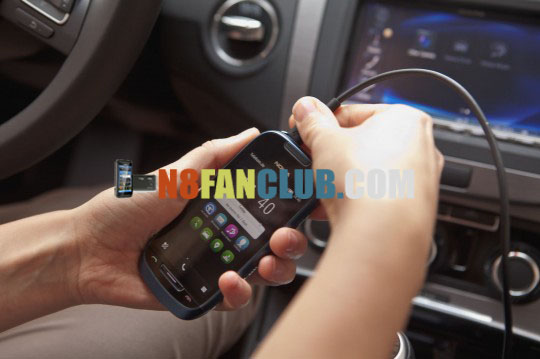 Nokia is pressing the accelerator on building mobile phone capabilities into cars with the release of the Nokia Car Mode app. Nokia Car Mode makes it easier for drivers and passengers to access maps, satellite navigation (provided by Nokia Drive), traffic updates, music and voice calls when they are in vehicles, so there’s no need for a separate music player or satnav. Smartphone features and services are designed and displayed to optimise the usability in the car and avoid driver distraction.
The app, written in Qt, will be available for the Nokia 600, Nokia 700, Nokia 701 and earlier smartphones that have been upgraded to Symbian Belle, this definitely indicate Nokia N8, Nokia E7, C7, C6-01, E6 and X7. It will also be available for Nokia N9. Conversations first reported on Nokia Car Mode when it was known as Terminal Mode back in March.
Nokia Car Mode is the first solution supporting the MirrorLink standard that deeply connects phones to in-car screens, steering wheel buttons and speakers. With MirrorLink consumers can control their smartphones via the car dashboard, as if the device and its apps were integrated into the car itself.
In fact, Nokia smartphones with Nokia Car Mode can be connected to Alpine’s new ICS-X8, a dashboard-mounted unit that lets drivers of supported cars use MirrorLink capabilities.
“MirrorLink is a big leap forward in allowing car drivers to access their favourite smartphone stuff,” said Floris van de Klashorst, Director of Automotive Services in Nokia’s Location & Commerce business. “Users have maps, music and plenty of other features on their phones; MirrorLink unlocks them for when they’re in their cars.”