Today sees the launch of a new smartphone, the Nokia 500. Boasting a 1GHz processor, changeable back covers plus the Symbian Anna operating system, this is a nifty, personalisable performer that comes in at a price that won’t break the bank.
If you’re looking for a low-cost, full-function smartphone, then the Nokia 500 should meet your needs and more. As you can see from the pictures, this is a touch-screen phone. It’s got a 3.2-inch capacitive touch display, with a screen resolution of 640 x 360 pixels. On the back, there’s a 5-megapixel camera that can also capture video – ideal for holiday snaps and days out. 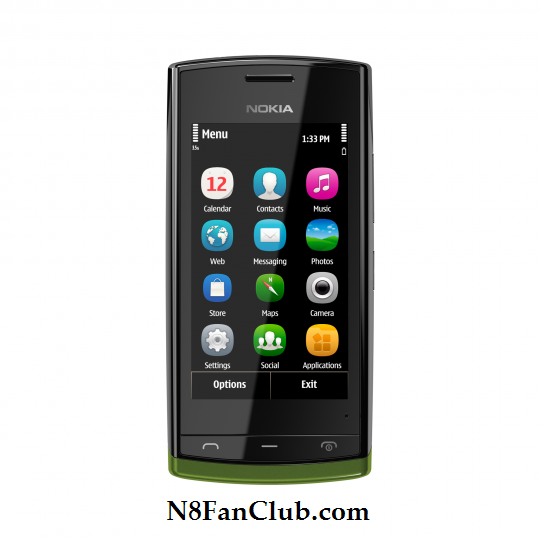 The Nokia 500 comes with the latest Symbian Anna OS, offering a refreshed UI, a better browser and split-screen messaging. As you’d expect, preinstalled you’ll find the latest version of Nokia Maps for free drive and walk navigation, plus you can download every other app you might need from the Store. If you’re anything like us, then your first week with the phone will be occupied filling and then emptying the phone of dozens of apps. The music player is complemented by an FM radio receiver and Internet Radio access to all the music and news you might need, not just from your own country, but from around the world. Social Media is catered for through the Social app, bringing friends’ updates to your homescreen.

Under the hood, there’s the 1GHz processor – allowing for plenty of oomph when you’re multitasking lots of apps or doing something extra-demanding. There’s 2GB of storage memory, plus the possibility of increasing this by a further 32GB using the micro-SD card slot. Like all our recent smartphones, it offers pentaband radio coverage so world travellers need never be out of touch, 3G data up to HSUPA speeds [that’s a whopping maximum speed of 5.8Mbps nowadays, by the way]. There’s also Bluetooth 2.1 and Wi-Fi b/g, as you’d expect. The phone measures 111.3 x 53.8 x 14.1mm and weighs in at 93g – lighter than any other Symbian^3 phone to date.
It’s also worth mentioning the battery, which despite the faster processor, still manages to pull off a very respectable performance. For us, that’s an absolute priority. The battery will see you through 5-7 hours talk time, 450+ hours in standby mode or up to 35 hours of music playback, if that’s your thing.