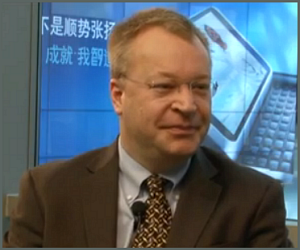 Nokia may be committed to producing Windows phones as its primary mobile operating system, but not before slowly parting with its first love.
The company will continue to support smartphones that run the Finnish company’s Symbian platform until 2016, CEO Stephen Elop told Anna Shipley of Nokia Conversations, China Edition in an interview (video below).
“We’re in a period where the investment in Symbian absolutely continues,” Elop said.
“Even as we go through a transition towards our primary smartphone platform, Windows Phone, you will see that continued investment. And I know there’s been questions about–so how long does that continue–and we’ve now been very clear about that, that software updates to Symbian devices are expected until at least 2016. So there’s a long history still to be paved for Symbian in the future.”
When pressed, Elop confirmed that Nokia will maintain its customer service and apps as part of Nokia’s ongoing support for Symbian customers.
The close relationship with Microsoft, forged last February, goes two ways. On Tuesday, Microsoft made a show of highlighting its relationship with Nokia as a special Windows Phone partner by promising to release Microsoft’s anticipated fall update