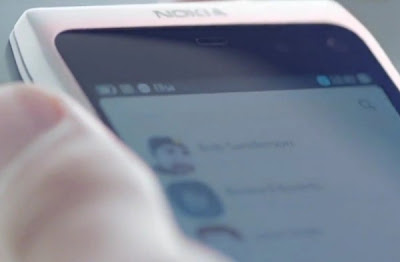 WoW… Video Teaser is showing something awesome regarding Nokia N9 – Watching out this video shows that Nokia N9 would be having PR 3.0 Belle when it would be launched. So this is the quick preview of PR 3.0 Belle Firmware Update. We are still waiting for PR 2.0 Anna update and after grabbing PR 2.0 we’ll anxiously be waiting for this awesome PR 3.0 Belle update… 🙂 …

That is what we presumed from the Symbian ANNA icons used in this video and fresh UI which has to be launched in Symbian Belle PR 3.0 firmware update.
However this Smart Phone is supposed to have MeeGo Operating System and Intel Atom Processor clocked at 1.2 Ghz. 12 Megapixel Carl Zeiss Lens for Camera along with Dual Led which is supposed to help while recording HD videos at night.