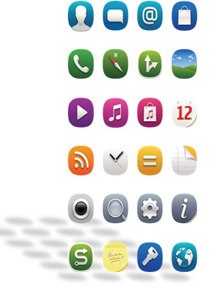 The Nokia vice president Purnima Kochikar has jus released an open letter to developers, revealing the company’s plans about their Symbian^3 platform. Apparently the Finns are planning to continue releasing new smartphones running on Symbian^3 as well as regular updates for the OS itself.
Those new devices should bring 1GHz+ CPUs and faster GPUs to Symbian^3. Kochikar also says that the company will make full use of its expertise in location-based services and imaging to make its new Symbian^3 smartphones more attractive.
Of course, it’s the UI that’s currently holding the Symbian lineup back, but Nokia plans to do something about that too. There are several updates that should dramatically improve user experience in the pipeline. The first one is pretty major, delivering a brand new home screen, new flexible widgets, new icons (pictured left), a faster browser, new Navbar and a fresh look and feel to Ovi Store and Ovi Maps, including integration of social media services in Ovi Maps.
That first update should come some time in the summer. In fact several of its components have already made their way to the Nokia C7 Astound that should hit T-Mobile US in a week.
Unfortunately, once again we didn’t get the answer to the most important question – how long will the Symbian^3 support last? Apparently Nokia will only be able to answer this once they enter the WP7 market and see how things go there.
Still the company promised that it won’t be dropping the Symbian^3 support immediately even if their first devices with the Microsoft turn out to be a huge success. Nokia says that it will be offering some support until the natural lifecycle of the Symbian^3 smartphones has ended in an attempt to convince users to switch to the WP7 after that.
On some markets such as China, India, Russia and Turkey, the Symbian^3 smartphone platform will continue to be marketed alongside Windows Phone 7.