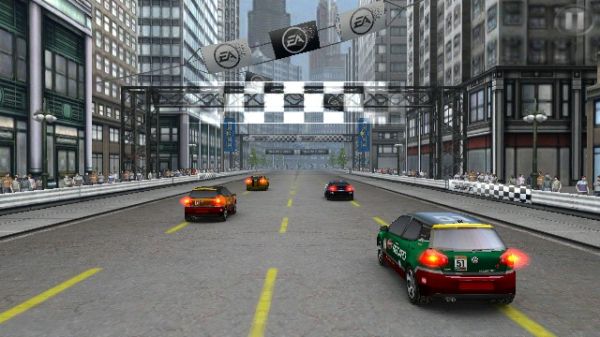 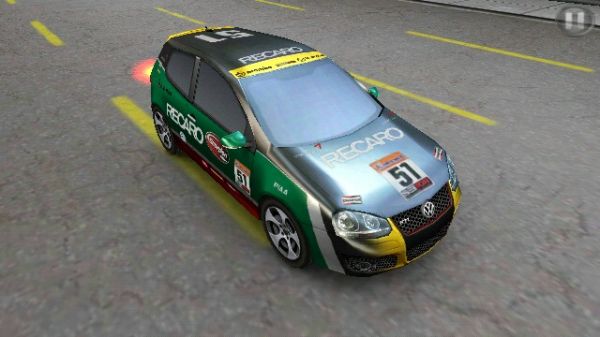 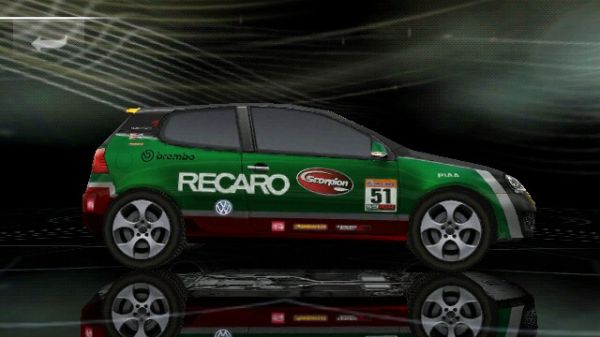 NFS Shift HD running on the BMC2727 in the Nokia N8
While I’ll get to the biggest change in the N8 that is the Symbian^3 OS in a while, Nokia has also updated what’s calling the shots behind the scenes. Up until Symbian^3 came along, Nokia rarely ever bothered with including a GPU in its phones and even when it did, it was never really put to any good use. Its last N-Series flagship, the N97, didn’t even have a GPU per se. Except for the Cortex A8-touting outlier that the N900 is, the best that Nokia has done in terms of integrating GPU’s into phones is make use of the OMAP 2420 SoC, which included a PowerVR MBX GPU, in a handful of its previous devices and even this was left mostly unutilized. Things have changed, for the better, with the Nokia N8. Although Nokia is still sticking with a tried and tested ARM 11 implementation for its CPU, it has actually gone ahead and made full use of a discrete Broadcom BCM2727 Multimedia processor for graphic duties. While you can see performance numbers later in the review, the general impression is that it is fairly competent as a GPU. 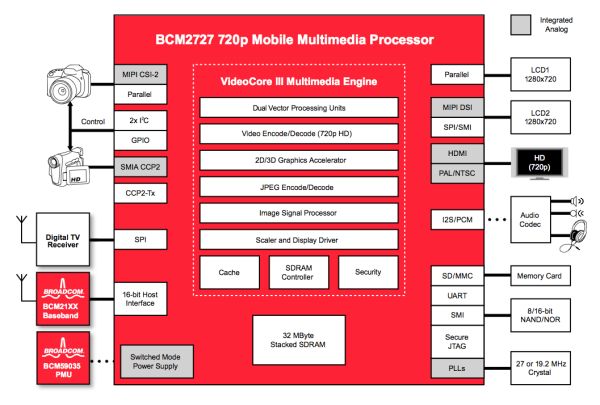 The BCM2727 Block Diagram
Nokia’s choice of using an aged ARM 11 implementation, down-clocked to 680 Mhz (instead of the spec’d 772 Mhz) for its CPU may draw criticism in this day and age of gigahertz-capable, multi-core mobile SoC’s. But digging a little deeper seems to show that there may be some method to this madness. You see, pretty much everything in the N8 runs around the BCM2727 media processor. I would hazard a calculated guess that apart from lightweight low-level OS functions and interfacing with the baseband and other radio’s, there isn’t much else for the CPU to do on the N8. Plus, Symbian’s inherently efficient use of available resources helps too.
So what was needed in this case was a low-power, package efficient CPU design that could just about get the job done while sipping as little power and occupying as little space as possible. And this is almost exactly what Nokia found in the Samsung K5WXXXXXXX series of Fusion Memory MCP’s. This MCP (Multi Chip Package) allows Samsung to stack different memory types (DDR, NAND etc.) along with non-memory logic in the same low-power package. So for basically the same footprint as a single memory chip, Samsung is able to integrate the DDR memory (256MB), NAND (512MB) and a CPU (TI ARM11 applications processor).
Most of the heavy lifting in the N8 is done by the BCM2727, as it renders the Symbian^3 UI and games alike, works with the camera module to capture and process 12MP stills and 720p videos, encodes/decodes those videos, drives the HDMI output (upto 720p) and even decodes the audio. So in case of the N8 and Symbian^3, it made sense for Nokia to have a low-power ARM11 CPU coupled with a reasonably powerful and competent multimedia processor. Using an A8 Cortex-based 1Ghz+ part here to run Symbian^3 would have been overkill and power-inefficient. And this decision is quite obvious when you use the N8. The UI is very fluid and responsive with crisp transitions and swift app switching. Furthermore, the N8 posted very competitive battery life numbers to further substantiate Nokia’s decision here.