Please disable your ad blocker and enable java script on web browser. Our content is available for free, but in order to pay the costs of server we have to display advertisements.[ ? ]
We just received a tweet from @NokiaIndia that Nokia N8 or Symbian^3 wont receive an update before January 2011, while this is a sure a big disappointment for the users waiting for the update to remove some of the annoyances and some better performance, we could only hope that they will make it a big update in January 2011. 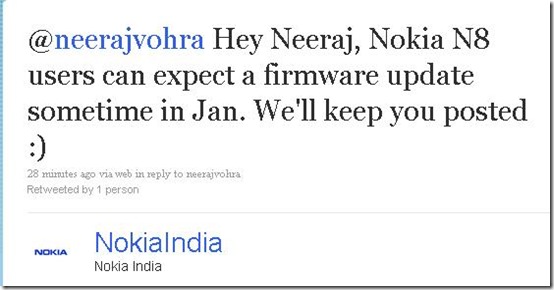 But at the end… its sure a disappointment for the users who given a big sales figure to Nokia and also more worse as they still not confirm that its coming even in first two weeks. Usually “sometimes in month” been the last week of month, when it comes to Nokia.
The day coming close.. the day, when our favourite Nokia N8-00 is expected to get the first firmware update. Nothing confirmed from Nokia officials, but high hopes due to some almost confirmed rumors that new firmware will be announced with/ before next coming Nokia release of Nokia E7-00.

This will be the first firmware update after the current version that is 011.012 and there are many things that could be expected from it other than the bug fixes. Let me list of top 10  …
Update (Thanks to waloody88):
Adding a few features more in this wish list that are sure worth expecting or wishing from Nokia N8 firmware update PR 1.1
Please write your suggestions to add on this list. May be someone from Nokia might be listening your comments as we seen in past that they do.