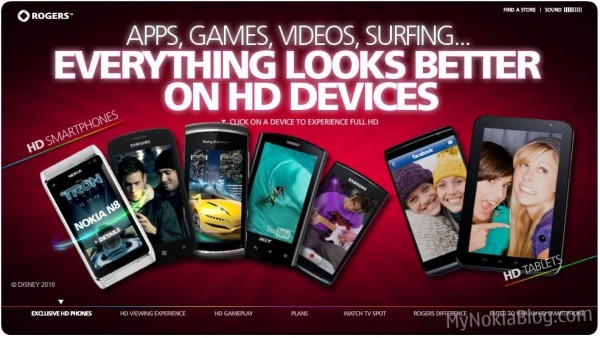 Canadian mobile carrier, Rogers has a new campaign to push their HD smartphone line up. “This Holiday, it’s gotta be HD or NOTHING!” and that “everything looks better on HD devices”. Hmm…what is their criteria for HD?
Check out the Nokia N8 that a while ago now was leaked to be coming to Rogers. Later we had confirmation that it was available on order though we had problems clicking to the order page. This one thankfully seems to work. (See screenshots).
You’ve got the introductory HD pages which one particular phone is chosen. N8 is given the “HD Viewing experience” watch and create your own movies – understandably with HDMI and actual movies having been made with the N8′s camera. Then you’ve got individual pages for each smartphone’s details.
Also worth checking is that TRON branding that runs throughout this Rogers advert for the N8. According to Alex68 Nokia’s made an exclusive deal with Tron (Disney) and there’s a lot of content coming to Ovi Store. See that all the other phones don’t show tron but YouTube or Game play (Even on their dedicated pages). 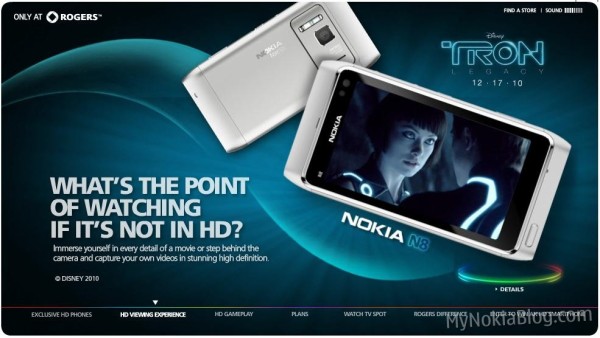 Click on the headings “Apps, 12mp cam and social view” to see more. I wonder why they chose to palyback a video that ISN’T full screen. -_-

12 MP Camera
“Not only is the N8 the first phone in Canada to feature Symbian^3, but it is the first phone to bring you a professional grade 12 MP camera with optics by Carl Zeiss. Capture stunning photographs with the Xenon flash or record cinematic quality video, and then edit it with the native video editing software – shoot, edit, and publish to YouTube.”
Apps
“If you still need more, sign into the Ovi Store from Nokia where thousands of apps are waiting to be downloaded, letting you constantly upgrade and improve your device.”
Social View
“The Nokia N8 brings Facebook and Twitter together at your fingertips in communities, featuring status updates right on your home screen. Chat, message, and talk with friends and family around the world, and even speak face to face with the built-in, front-facing camera.”
ORDER PAGE:
79.99 CAD, 3 year plan with variable packages from 50 – 70CAD/month. Theres also a free Bluetrek Metal Evolution BT headset, plus an additional bonus feature. 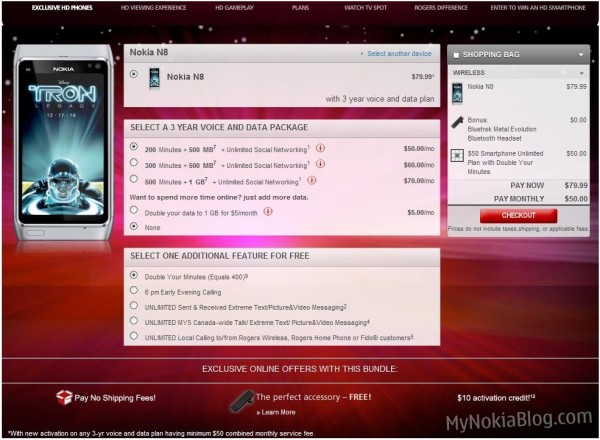 Cheers Keith for the heads up to mynokiablog.com/tips!
Also odd is the choice of S.E. vivaz for HD gameplay. Vivaz?
Via Rogers